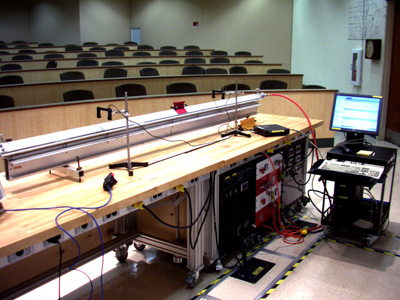 A glider on a level air track is pushed, giving it a velocity which remains roughly constant on the low-friction air track. With a known displacement and a stopwatch, one can then calculate the velocity.

The kinematic version of Newton's first law says that a body in motion tends to stay in motion moving in a straight line unless acted upon by a force. This is exactly what is happening here. The glider is given an initial velocity being accelerated by the lecturer's hand. Upon release, the glider maintains its final velocity. The air track provides a low-friction surface for the glider to move on so not much energy can be lost as heat. Thus the speed will remain roughly constant. The direction will change, however. The velocity will switch between v0 and -v0 each time it hits a bumper in an elastic collision whereby the direction of its momentum is reversed.

In this case, we're using the glider as the vine for the photo-gates. By doing this we do not increase the mass of the glider by adding a vine. If we did, this would increase the overall friction and cause the gilder's energy to damp out faster and the velocity wouldn't appear constant at all. The red gilder is 10.1 cm long and the photo-gates are equally spaced along the track such that, the distance between the two gates is the same as the distance from one gate to the bumper and back to that gate(ie, 1/4 -gate- 1/2 -gate- 1/4).