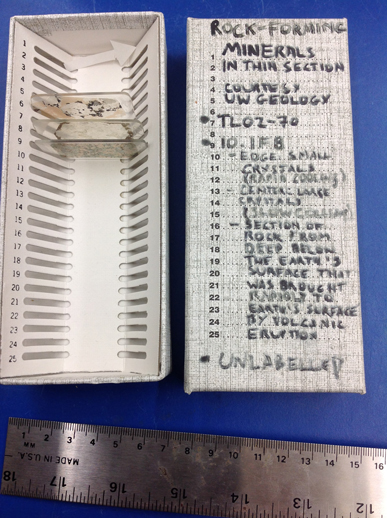 Three examples of rock-forming minerals in thin-section were kindly donated to UW Physics Lecture/Demonstration by the UW Geology Department.

Preparation and examination of thin sections is a topic in optical mineralogy, and is typically covered in the undergraduate geology major's coursework.

These thin sections are approximately 30 microns thick, and mounted on glass slides so they can be handled.

Observe the changes of the colors, which are frequently quite beautiful.

The pictures above show thin section 10.1F8, one of the three sections donated to UW Physics by UW Geology.

This thin section comes from one of the few rocks we have at the Earth's surface that come directly from the Earth's mantle. It was apparently ripped out place by an adjacent upwelling of magma from deeper within the Earth's interior.

Note that the interior of the thin section shows large crystals, while the perimeter shows small crystals. One infers the perimeter must have melted during the rock's journey to the surface, and then suddenly cooled. The interior presumably cooled much more slowly during the original formation of the rock.