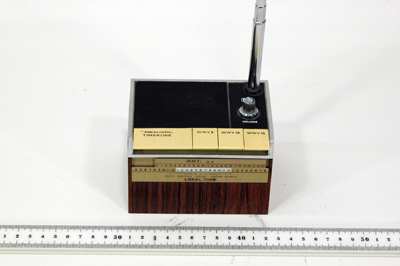 The WWV signal broadcasts correlated universal time. This can be acquired by, a phone call WWV to listen to the signal, access the same signal online at NIST.gov, or by the use of a Radio Receivers that pick up the WWV time signal as shown in the above photo.

The telephone at 1-303-499-7111 or the web site works the best, because the WWV receiver has a hard time receiving the stations in the building.

The National Bureau of Standards maintains two radio transmitting stations, WWV at Ft. Colonies, Co., and WWVH near Kekaha, Kauai (Hawaii), for broadcasting standard radio frequencies of high accuracy. WWV broadcasts are on 2.5, 5, 10, 15, and 20 MHZ. The broadcasts of both stations are continuous night and day. Standard audio frequencies of 440, 500, and 600 Hz on each radio carrier frequency by WWV and WWVH. The duration of each tone is approximately 45 seconds. A 600 Hz tone is broadcast during odd minutes by WWV, and during even minutes by WWVH. A 500 Hz tone is broadcast during alternate minutes unless voice announcement or silent periods are scheduled. A 440 Hz tone is broadcast beginning one after the hour by WWVH and two minutes after the hour by WWV. The 440 HZ tone period is omitted during the first hour of the UT day.