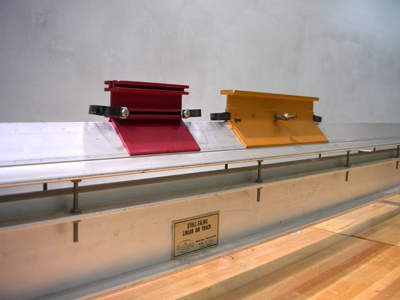 Unequal mass air gliders collide. For example, a small cart hits a big one elastically. The big one is placed so that after the collision both carts hit the ends simultaneously. The carts will again collide at the original place.

In conservative systems, momentum is always conserved. In the lab frame, one glider is in motion and one is at rest. Thus, the total momentum of the system is P0 = m1 * v1 where m1 is the mass of the glider in motion and v1 is its speed. In an perfectly elastic collision, there is no loss of kinetic energy. Invoking conservation of kinetic energy and momentum then, the velocities of each glider after the collision can be determined in terms of their respective masses and the speed of the first glider. The result is this: