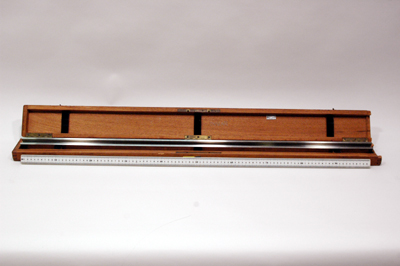 This is a calibrated stainless steel bar with 100 1cm marking on it, know as a Standard Meter.

Show the students how long the meter is. Highlight the importance of standard and precise units. Use the light to illuminate the meter and the magnifying glass to magnify the fine graduations on the meter.

The metric system was originally set up in 1791 by the French National Assembly. The meter was intended to be one ten millionth part of a quadrant of the earth through Paris, (an arc from the pole to the equator). The meter was fixed by law in 1799, and it became compulsory in France in 1801. The platinum Meter des Archives was the material standard until 1889 when it was super seeded in the by a platinum iridium bar stored under controlled conditions at the International Bureau of Weights and Measures at Sevres . This standard was abandoned in 1960 for several reasons, a principal one being that the limited accuracy with which the separation between lines on the bar can be determined does not meet the present requirements of science and technology. Until recently, the meter was defined as 1,650,763.73 wavelengths of orange-red light emitted from a krypton-86 lamp. However, in October 1983, the meter was redefined as follows: One meter --> The distance traveled by light in a vacuum during a time of 1/299,792,458 of a second.