Differences between revisions 7 and 8 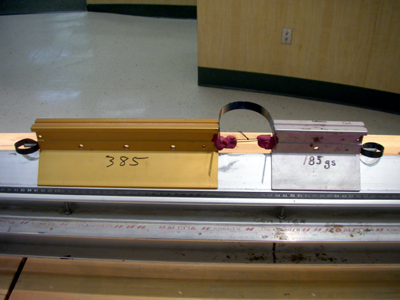 A basic principle of physics is the conservation of momentum, namely linear momentum in this case. Stated mathematically, Pinitial = Pfinal. In this demonstration, Pinitial = 0. Thus, the sum of the individual momenta of our gliders must be zero after the spring is released. Mathematically, Pglider 1 = -Pglider 2 <=> mglider 1 * vglider 1 = -mglider 2 * vglider 2. If using gliders of equal mass, the two gliders will have the same speed and travel in opposite directions. If using two gliders of unequal mass, the more massive glider will move slower than the less massive one.

This demonstration can be performed with both the inelastic and elastic gliders (see photos for string placement).