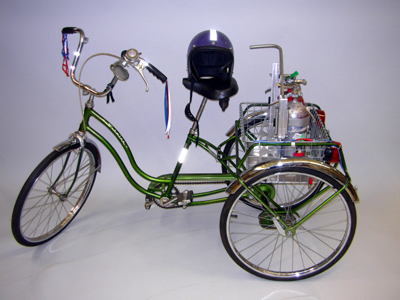 Dual-mounted CO2 fire extinguishers are on the back of a tricycle.

From the viewpoint of the conservation of linear momentum, our system is initially at rest (p=0). When the CO2 gas is shot out from the extinguishers, the constituent molecules carry with them a momentum in the reverse direction (pCO2 = mCO2 * vCO2). To conserve momentum, the tricycle must gain the same amount of momentum in the forward direction. While the mass of the CO2 ejected is relatively tiny compared to that of the tricycle plus the rider, this average speed of the molecules is very high compared to that which the tricycle will gain.