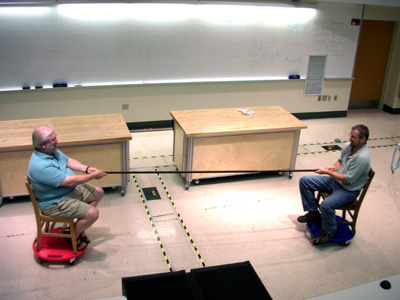 Two people on roller carts or roller chairs each hold on to opposite ends of a wooden rod. They each push or pull on the rod causing a reaction on the opposite person.

When one person pushes or pulls on the rod, the rod applies the same force in equal magnitude but opposite in direction as per Newton's third law. This force is then applied to the other person by the rod. The person then exerts an equal and opposite force on the rod which effectively cancels the initially applied force (neglecting friction). The net result of this push/pull motion is zero net motion of the volunteer-cart-stick system (this is not completely true since there is some friction in the axles and bearings of the cart wheels), ie. momentum is conserved. The system starts with zero momentum thus when one person pushes on the rod, the other person moves in response to the force. However, the pusher must move in the opposite direction at a speed dependent on their respective mass to keep the total momentum zero.