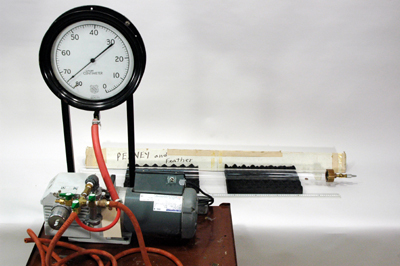 A glass tube contains a piece of cotton ball and a penny. It is fitted with a valve on one end so that it may be attached to a vacuum pump.

A glass tube at least a meter in length is equipped with a valve and nozzle through which the tube can be evacuated with a vacuum pump. Such a tube is called a guinea and feather tube because those were the objects traditionally used when the demonstration was performed in England centuries ago. The guinea was an English gold coin issued from 1663 to 1813 and valued at 21 shillings. In this tub, a modern coin and a ball of cotton are used. Our penny is so old that the edge of the penny is distorted from the years of use.

One can introduce this demonstration by asking the audience which falls faster, the cotton or the penny. Whichever answer is given is either right or wrong depending upon whether the experiment is performed in the air or in a vacuum. One can point out that in science there are often opposing theories, and in such cases, experiments are required to determine which theories are correct. Actually, an experiment usually cannot prove that a theory is correct, only that it is incorrect.

If a vacuum pump is not available, an alternate form of the demonstration can be done using a heavy book and a sheet of paper (smaller than the book)[1]. The two are first dropped side by side. The book will fall much faster. The paper is then placed flat on top of the book and the two are released together. They will fall at the same rate because the book eliminates the air resistance that the paper would otherwise experience.