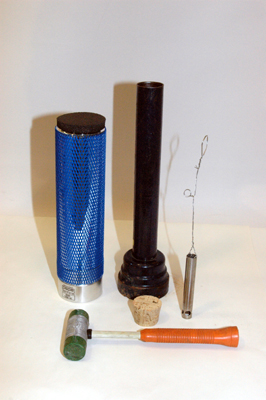 A stainless steel cup containing about 2 tablespoons of Liquid Nitrogen is placed into the nitrogen cannon. A cork is then pounded into the cannon to hold in the nitrogen gas. Finally, the liquid nitrogen builds up enough energy in the cannon to shoot a cork across the room. For faster action tip the cannon on its side to pour out the LN2 from it's cup.

This demonstration shows phase change for liquid to gas and gas presser. In this case we are using liquid nitrogen. Liquid Nitrogen (LN2) has a boiling temperature of −196 °C or −321 °F. The liquid rapidity converts to a gas state when in contact with a hot surface (ie. at room temperature) and in this case the interior surface of the cannon. You can show student by pouring some liquid nitrogen into the cannon. Pound in cork with the hammer. Point the cannon away from people. Liquid nitrogen will spill, vaporize due to it touches the hotter surface like the table or floor.

When the internal pressure becomes great enough, the cork will shoot out with a high velocity and with a good Boom too!

Heat and the First Law