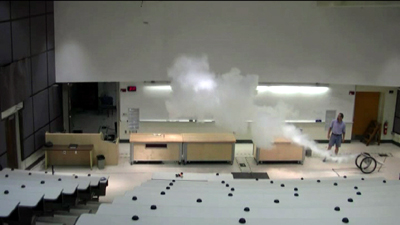 A homemade aluminum cannon with a 3" bore diameter and bore length of nearly 34" is mounted on two 24" bicycle wheels and shoots either rubber stoppers or bottles filled with sand to show recoil. The only propellant is the pressure buildup from the liquid nitrogen transitioning from liquid to gas.

After the valve is closed, the barrel becomes air-tight and nitrogen gas (and therefore pressure) is free to build up. In general, the aluminum cannon is at STP (P = 1 atm or 101,325 Pa; T = 293 K or 68 °F or 20 °C), and the liquid nitrogen has a temperature of -196 °C (-321 °F or 77 K). There is quite a lot of heat available to cause the liquid nitrogen to boil rapidly and transition into gas. However, the amount of volume that nitrogen occupies when in a liquid state is miniscule compared to the volume it can occupy when in a gas state. This ratio is 1 to 694 at STP and is called the liquid to gas expansion ratio.

The pressure is given by the ideal gas law: P = n*R*T / V where P is the gas pressure, n is the number of moles of gas within the container, R is the gas constant, T is the temperature of the gas, and V is the volume of the container. We will be using R = 0.082 L  atm  K−1  mol−1 and assuming the ambient air is at STP, and that the liquid nitrogen rapidly comes to thermal equilibrium with the ambient air to standard temperature. One should note that this is an ideal case, and that the barrel will cool down rapidly thus reducing the local ambient temperature and therefore the pressure.

In practice, there is no infinite friction. However, there is a high level of friction between the rubber stopper and the aluminum. The compressibility of the rubber decreases with hardness (i.e. it takes more force to compress the material). Thus, the normal force acting on the stopper will be larger for harder rubber. Therefore, the friction will be higher allowing for more pressure to build up before the friction is overcome. In a table below, the threshold pressure to break the static friction between the cannon and the stopper for each type of rubber is listed as measured. The stopper begins to slip once this threshold is crossed. The magnitude of the kinetic friction sets the time frame for pressure buildup. The longer it takes for the stopper to slip out, the more force there will be acting on the stopper at firing. Comparing the numbers below with the ideal case it is apparent the we can generate more than enough pressure to launch the stopper - 0.5 L of liquid N2 is more than enough.