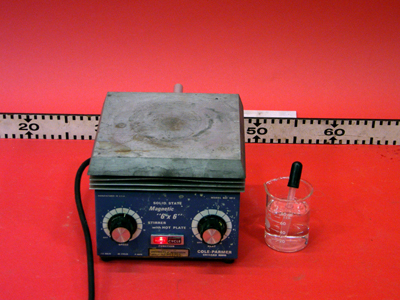 Drop water on a hot plate and liquid nitrogen on the lecture table.

When our two liquids come into thermal contact with surfaces at temperatures significantly higher than the boiling point of the liquid, we notice that little droplets form. These droplets seem to skid across the surface. When the liquid comes into contact with the surface, some heat is transferred from the surface to the bottommost portion of the droplets. This causes this portion of the drop to transition to a gas forming a boundary between the surface and remaining liquid. The gas is much closer in temperature to the boiling point of the liquid causing the liquid to boil off significantly slower than if it was constantly in contact with the surface. In essence, this is the Leydenfrost phenomenon in action.