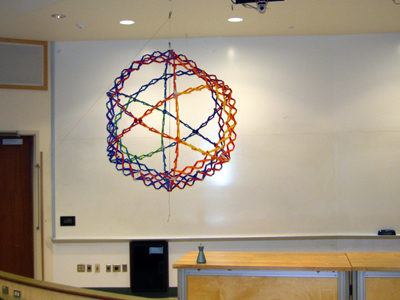 A collapsible sphere suspended from the ceiling is given a spin. A weight attached to the collapse mechanism is dropped causing the sphere to reduce its moment of inertia. Upon collapsing, the rotational speed of the sphere increase showing that angular momentum is conserved.

Clearly, since M is constant and Ropen > Rclosed, it follows that Iopen > Iclosed. The magnitude of the angular momentum of the rotating sphere is given by L = I*ω where I is the moment of inertia and ω is the angular speed. Since angular momentum is conserved, when the weight drops causing Iopen to reduce to Iclosed, ω must increase, which is what we observe.