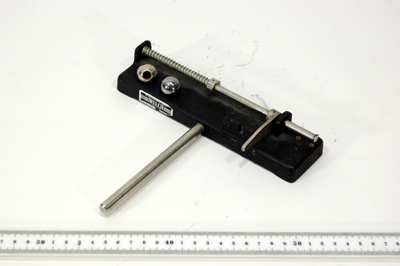 This older Welch Scientific apparatus is designed with a spring loaded device that simultaneously drops one steel ball while shooting another steel ball horizontally.

Tell students to pay attention to the vertical motion of balls. The fact that one of them has a horizontal velocity does not affect its motion in the vertical direction. The balls hit the ground at the same time. Make the analogy about simultaneously firing a bullet out of a gun and dropping one from the end of the barrel.

When the gun is fired the shaft is drown out of the ball and that ball drops vertically to the floor. The other ball on the other end of the apparatus gets hit by the sliding rod and sends this ball fling in the horizontal direction. Both balls are set into motion at the same time when the gun is fired and shows that the two balls will strike the floor at the same time despite the difference in the ball's trajectories. The two balls striking the floor can be observed by the simultaneous sounds at the point of impact.