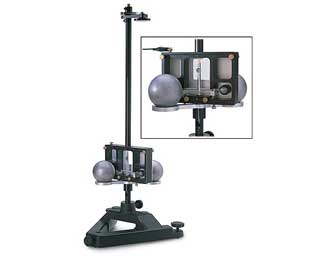 Two small lead balls are attached to a cross-beam which is suspended by a fine wire to form a torsion pendulum. Two large lead spheres are placed opposite the small balls to exert a force onto the suspended system.

The objective of this experiment is to determine a numerical value for Newton's constant, G. F = (GmM) / (r2). The two large lead spheres are then moved to the opposite position from the initial setup position. This exerts a torque which moves the cross-beam torsion wire system. Now let the system come to a new equilibrium position which is shown by a laser beam reflected off a small mirror that is attached to the cross-beam torsion wire system. The laser dot is reflected to the opposite wall and hence the motion of the cross-beam can be observed and measured. The finial equilibrium position will take several hours as the simple harmonic motion of the torsion pendulum damps out.

Each of the small masses experiences the force F at a distance L / 2 from the axis of the balance and this force is proportional to the deflection of torsion balance beam from its equilibrium position. From this one can drive Newton's constant without F. G = [2π2Lr2) / (MT2)] θ Where L is the center-to-center distance between of the smaller ball. The center-to-center distance of the large mass to the small mass when balance is deflected is r. The period of oscillation of the balance is T.