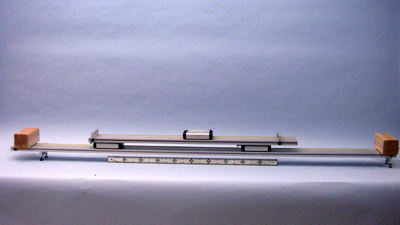 A small cart is free to move on top of a large rolling cart which comes to a sudden stop. The cart continues to move due to the cart's inertia.

When the whole system is set into motion, all carts obtain some particular velocity which would remain constant as per Newton's first law if air resistance and friction were not present. When the two carts on the bottom layer and the track resting on top of them collide with the wood block on the end of the bottommost track, they change their velocity. However, the top car remains in motion with its original velocity until reaches the end of the top track, putting a new force on the top car making its net externally applied force nonzero and therefore changing its velocity.