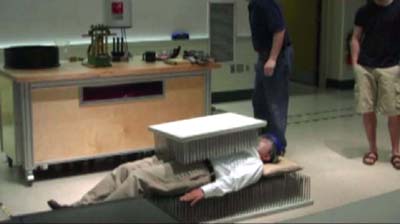 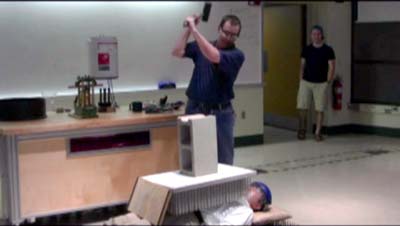 When Breaking a block:

The total force on the bed of nails (the volunteer's weight)is spread out among all the nails that are in contact with the volunteer. Thus, each nail supports only a faction of the total combined weight of the volunteer and the cinder bock. In fact, with our setup, one can stand on the top of the small bed of nails instead of having a brick on top. The total force is still spread out among the nails, and the reaction force from any individual nail is still greatly reduced. For example, let's assume the volunteer has an average human weight of 175 pounds. Our lower bed has 1375 nails, however not all of them are in contact with the person so let's assume that 60% of them are. Then the weight is spread out among approximately 825 nails. Therefore, the volunteer will only feel about 0.21 pounds(corresponding to a mass of ~3.4 ounces or ~95 grams) of force per nail on average. Some nails will poke the volunteer harder than others (i.e. since the weight of the body isn't evenly distributed, more weight will be supported by some nails than others). With a person standing on top, the force per nail is roughly doubled to 0.41 pounds of force per nail applied by each bed. The volunteer will feel slightly unconformable but will not be close to the average pressure threshold of pain which is approximately 23 pounds per square inch for an adult.

When the sledge hammer smashes the block, the volunteer will experience an additional force. The upper bed only has 425 nails which are, for the most part, all in contact with the volunteer's torso. The force imparted by the hammer is distributed across all of these nails. However, the cinder block is so massive (a weight of ~37 pounds or mass of ~590 ounces or ~17 kg) that almost all of the imparted force will be absorbed by the block. The block's relatively large inertia opposes much of the motion of the hammer. In addition, a large majority of the hammer's kinetic energy is taken away by the chunks of block that fly away during the impact. Thus, the force from the hammer imparted upon the volunteer is significantly reduced. This is why it is important that the block breaks. If it doesn't, all of the kinetic energy is available to be transferred.