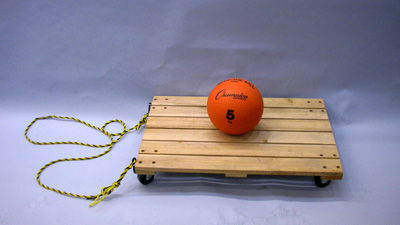 A ball is placed on a larger cart or dolly. When the larger cart is moved the ball moves in the opposite direction due to the ball's rest inertia.

As per Newton's first law, an object at rest tends to stay at rest unless acted upon by another force. This is precisely what happens. When the cart suddenly accelerates forward, the ball "wants" to maintain its current position at rest. Thus, the ball appears to flies off the cart in the direction opposite to the carts motion. In fact, the ball barley moves relative to the floor. This can also understood in terms of momentum conservation: there is initially zero momentum in the system so there should be zero momentum after. Thus the faster you accelerate the cart, the higher the speed the ball will have when it rolls backward.